Kratos and Atreus spend a brief moment at Sindri’s home in order to discover how they might travel to different realms now that their old realm travel system was broken.

Sindri has developed a special contraption that will help convert mystic gateways into realm travel locations. This contraption depends on the bifrost jeweled eyes of the head of Mimir

In this new chapter of Kratos and Atreus’s adventure, both will travel to the Svartalfheim realm to speak with a special dwarf named Durlin, who knew Faye and assisted in orchestrating a rebellion against Odin. If anyone has information about the “tunnels” where the Giant King Tyr is being held by Odin, it is this Dwarf, Durlin.

After modifying the mystic gateway, Kratos and Atreus travel to Svartalfheim where they approach the city of Niðavellir in search of Durlin, who is expected to be at a pub. They could not find him there, but they were tipped off by the pub owner that he could be found in a different district across the lake.

During their travels, the Drawfs who inhabited the city were afraid of Kratos, it being implied that Odin ruled the realm by fear and death. The barkeep even recognized the head of Mimir and spoke unkindly of him, which led Mimir to recall how he helped subject the dwarven people and exploited their labor and resources for Odin. Mimir expressed guilt about his dealings and requested Kratos and Atreus’s help in destroying several mining rigs he set up and thus begins our first side quest in Chapter 2, The Quest for Tyr.

After destroying these mining rigs and collecting the valuable materials contained therein, Kratos, Mimir, and Atreus take one more side quest to free a giant sea creature that was imprisoned in the lake and mined for its fatty oils. The imprisonment of this creature brought Mimir great regret, and so the group set forth in removing the chains that bound the creature.

This recording ends just as Mimir is determined to speak with the gigantic creature and encourage it to make its escape.

Watch Part 2 of this playthrough to see what happens next : ) Link below. 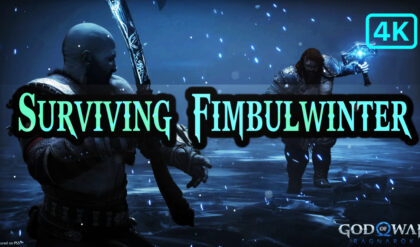