Please enjoy this no-commentary playthrough of God of War Ragnarok in 4k.

In this playthrough, we begin the game as Kratos, God of War, with his son Atreus who are both at the end of a hunt when they are ambushed by Freya, seeking to avenge the loss of her son Baulder.

After a short battle, Kratos and Atreus escape Freya and make it into their land’s protection stave, which is a magical enclosure that keeps enemies away. They know they are safe from Freya as long as they are inside the stave.

Once home, Atreus is concerned with the health of their oldest wolf Fenrir, who is only moments from passing. Atreus comforts the dying wolf and performs an unknown magic which goes noticed by Kratos, yet when asked later about this spell, Atreus does not recall speaking it.

Kratos, wanting to distract Atreus, advises him to train, while Atreus demands a moment alone to bury the wolf. Kratos approves and then goes inside to lie down, where he dreams he is on a hunt with his wife, Faye. The dream appears to be a memory of when they first encountered the wolf Fenrir on their land. The dream ends abruptly with Faye advising Kratos that he has very little time and that there is much to do. Confused, Kratos wakes violently from his dream and recalls his axe to his hand in panic.

Mimir, a talking head bewitched by magic, lets Kratos know that Atreus never came back, and Kratos places Mimir onto his belt and they go out into the night to discover what has happened to Atreus, thus beginning a new adventure for Kratos, the God of War.

Hot on the trail of Atreus, Kratos notices that a bear has been mauled by a larger bear, and one of the trees that powered the protection stave had been broken in consequence. This has caused wildlings to wander into their land, where they are soon met by Kratos’s unforgiving ice axe.

As Kratos and Mimir close in on Atreus’s trail, Kratos is blindsided by the larger bear they believed to be in pursuit of Atreus. Kratos fights the large bear into submission, and as he strangles it, the bear disapparated into Atreus, who cannot recall any events of the prior transfiguration.

Kratos consoles Atreus and also lectures on how more training is needed to control this unknown new power, while Atreus reasons that new discoveries imply he should seek out answers about his identity and destiny.

Both Kratos and Atreus are exhausted from their exciting night and, after restoring the broken stave, they head back home where rest is at their fingertips, only to be taken away by surprise visitors, Thor and Odin the Allfather.

Odin, aware of the loss of his best tracker, Baulder, as well as the death of two of Thor’s sons, seeks to strike a deal with Kratos, the deal seeming fair and only wanting peace.

Kratos knows there can be no meaningful agreement with Odin, ever, and so he declines Odin, who accepts as he tells Thor, “Don’t take all night”, in which an epic and violent battle ensues between Thor and Kratos.

After Kratos proves his strength to Thor, Thor considers their fight to be enough for the moment and then leaves Kratos, who is met by the two blacksmith dwarves Sindri and Brok.

Kratos yells to the dwarves to head to the house because he was made aware by Thor that Odin has designs for Atreus. Fearing the worse, Kratos and the dwarves make their way back where they find Mimir and Atreus inside with their health intact; Odin, already gone.

Kratos discovered Odin propositioned Atreus with an invitation to visit Asgard. Kratos and Mimir both suspect that Atreus is not telling the full truth of the proposition.

Before Thor’s and Krato’s fight, Atreus, was requested by Odin to halt his search for the old giant king Tyr. Kratos was unaware that Atreus had been adventuring on his own in search for evidence of Tyr, and was angry at Atreau’s withholding of information.

Atreus apologizes but also takes this opportunity to share discoveries he had made recently regarding the whereabouts of Tyr. He takes Kratos on an adventure to show Kratos a secret magical room located inside an old mural left by the giants. This room contains additional lore and implies that Tyr is not dead, as believed, but instead is being held prisoner by Odin.

With the newfound lead that Tyr might still be alive, Kratos, at the advice of Mimir, agrees to go on an adventure to find out the truth of Tyr alongside Atreus.

In preparation to leave the now unsafe home, both Kratos and Atreus pack up their equipment and leave alongside the dwarves Sindri and Brok to the dwarves’ private home, which is hidden in an in-between realm, safe from the spying ravens of Odin.

That brings us to the end of GOD OF WAR RAGNARÖK: Surviving Fimbulwinter.

For more gameplay, please check out the God of War Full Game Playthrough playlist where we are recording and summarizing more of our playthrough of God of War Ragnarök 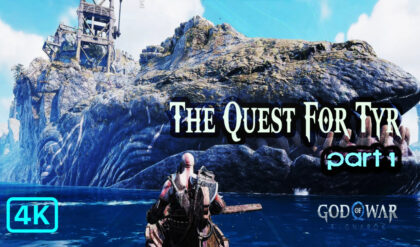